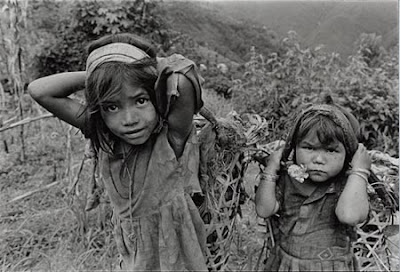 Masino & malo
Masino (7 years-left) and Malo (5 years-right) carry baskets full of produce that hung tied with a band on their head. They are Tamang, a low cast in Nepal. They are from second husband of their mother. “No, we don’t go to school. We have no money and mother says we must all work”
Talaku village, near famous tourist resort of Chisapani in north-east of Kathmandu, Nepal. 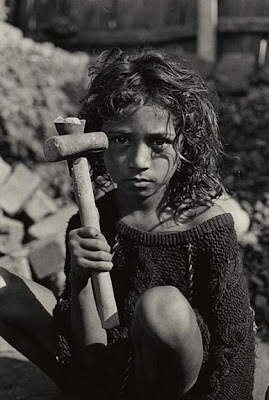 Shehnaz
Shehnaz's (12) father has married 3 times ad left Shehnaz and her mother 9 years ago. Now Shehnaz works with her mother all day long and between two of them they earn Taka 40 (less than 60 US cents) per day. She also has a brother. As her mother could not afford to send both of them to school, only her brother goes to master sahib (school teacher) for tuition. It cost them Taka 200 per month. Her hammer is very heavy and she knows that if she loses her concentration, she will smash her fingers.
Pagla Ghat. Narayanganj, Bangladesh. 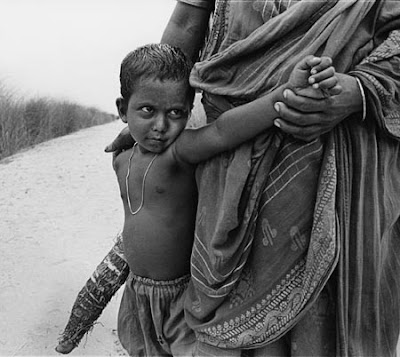 Root for Food
This morning my daughter found this root. Thanks God. Today we will eat.

The content posted here are collected from one of the web projects that I am currently working on.
I thought I needn't go much far to know about the world...
And today morning I was going thru a book to find out this:
"Nepal is poor and is daily becoming poorer, said one report published in 1974 (ARTEP). In the late 1970s, 40 percent of the Nepali households were estimated to be living below the poverty line (Jain, 1981). Today it is estimated that over 60 percent of the households fall into this category (Shrestha, 1993). Such grim statistics of poverty have provided a cogent rationale for foreign and begging. A shameless beggar, that is what the Modern Nepali states and its ruling elite have become (Panday, 1992)"
-Rural Political Economy of Nepal, Bharat Pokharel.

ahhhh! I heave a big sigh, not of a releive but of a wou8nd